How Will Climate Change Impact Your Remediation Approach in 2018?

Two controversial topics for some, but well-documented science.  I had an opportunity to read "The Water Will Come" by Jeff Goodell, one of Booklist's Top 10 Science Books of 2017, on an extended plane trip during this holiday season.  Goodell presents a well-researched overview of the impact of climate change and the associated changes in sea level on countries, populations, infrastructure, and politics.   While the geopolitical challenges of climate change are well beyond the scope of most of our local environmental remediation efforts, Goodell did prompt me to reflect on a few observations we've made in the field and the potential impacts to come.

Is your remediation site in a low lying or coastal area?   US EPA confirmed Hurricane Harvey impacted 13 of 41 of the US’s most-toxic waste sites in the Houston area in 2017.  Goodell points out that the "Runit Dome, a concrete bunker on Enewetak Atoll where the US military buried 111,000 cubic yards of radioactive debris left behind after then nuclear tests of the Cold War. It sits right at sea level.  "It is already cracked, and as the waters rise, it will be submerged, creating  a problem of nuclear waste in adjoining waters."

Is the infrastructure that supports your remediation systems or access to your facilities at risk in high-water conditions?     The reactor meltdowns at Fukushima, Japan resulted from the failure of the cooling water systems in turn caused by the loss of power sources in extremely high water conditions precipitated by the tsunami and storm surge.  Critical infrastructure and no doubt remediation systems failed in New York and New Jersey as a result of Super Storm Sandy. 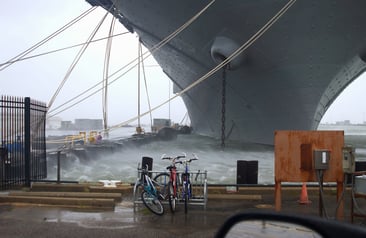 The Navy base at Norfolk, VA, the largest in the U.S., anticipates a significant impact to operations (and environmental cleanup) by 2020.

High-resolution tools like the Hydraulic Profile Tool (HPT)  can provide accurate an assessment of groundwater levels and changes in soil salinity and permeability as the result of saltwater intrusion.  Rapid, high-resolution profiles can provide a quick diagnostic check of the changes in soil and groundwater conditions and most importantly, the vertical relationship of your installed remediation systems to those changes.

Goodell teaches that "the reference source for the scientific bases for global climate agreements and coastal planning are the reports published by the Intergovernmental Panel on Climate Change (IPCC).  The most recent report, published in 2013, was the basis for the 2015 Paris treaty on climate change.  Unfortunately, this report was out of date as quickly as it was published because the changes in sea temperature, sea level change, ice melt, and extreme weather events have accelerated since the data were collected and presented."  This situation requires collaborative efforts to collect, assemble, and study the many factors affecting each of these conditions.

What role do you play in collecting information pertinent to the impact of storm events, changes in groundwater level, and changes in sea level in coastal regions on your current or future remediation projects?  How will your customers be affected by the loss of buildings and infrastructure, loss of access to their resources both natural and man-made, and the impact and cost of future remediation efforts on impacted contaminated land?

I recommend "The Water Will Come"  as a starting point for understanding the magnitude of the challenges ahead of us and to aid our planning for the future long-term placement and optimization of remediation systems.

Follow this blog as we walk through the elements of high-resolution site characterization, what works, what doesn’t work, and learn how to achieve better results earlier and at lower cost on your leaking underground storage tank site.

Other Blog Posts that may be of interest:

6 Reasons for High-Resolution Characterization of Your UST Site

5 Steps to Developing Weighted Lines of Evidence During Site Characterization

Register for our future webinar training